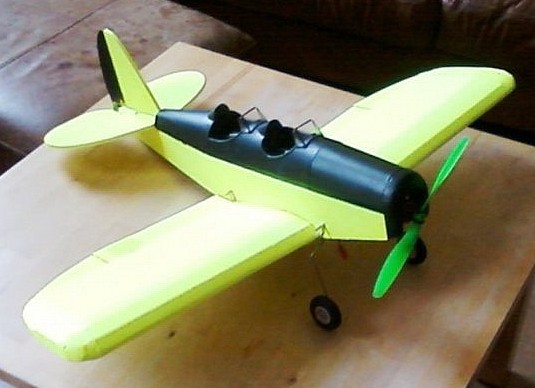 Plans – PDF file. (Can be printed on A1 foam board.) Tribewt

This plane flew quite happily with a Blue Wonder brushless outrunner motor with an 8x4 prop. For a little more power I later upgraded the motor to an FC 28–22 1200kv motor from HobbyKing with an 8x4.5 prop.

After building the Flite Test Baby Blender it was fairly obvious the build method could be extended to cover a whole range of models. I liked the swappables concept, but wanted something a bit more aesthetic. I took a lot of inspiration from the Ryan PT 22, and an easy start point was the Baby blender plans. I lost a wing, flattened the body and rounded off some of those harsh edges on the rudder and elevator. The body is basically the Baby Blender, with a slight nip at the front. All the basic BB tail components are the same, but with added shaping. 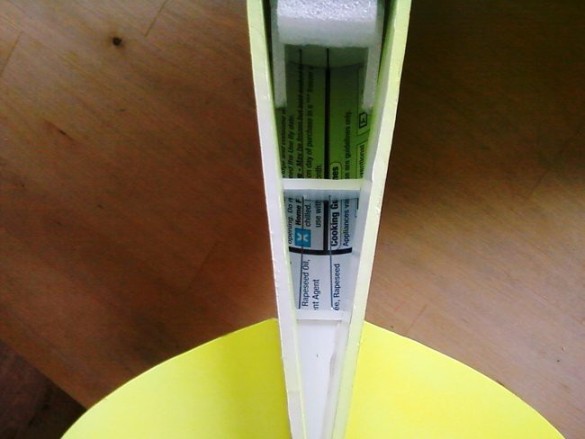 Because the depth of the fuselage was reduced I decided to add extra formers – one at mid point halfway back to the tail and another just before the tail to help stiffen that whole rear section. Note the cereal pack cardboard used to make the turtledeck! I used the BB cockpit former, shortening it at the front and fiddling and fitting the front and rear panels to account for the new tapers. 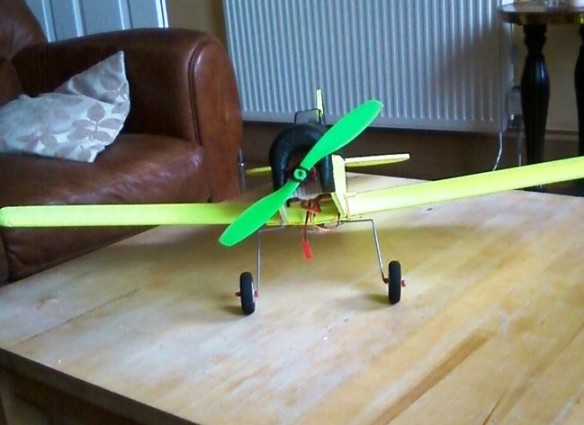 When I had the body all made up it was time to sort out the wings. All I could really do was go to real life and see what similar aircraft were doing with their wings and their relative positions on the fuselage. I made the wingspan a bit longer (700mm) than the basic BB. I then extended them a bit more with foam wingtip extensions. I could have made the wingspan wider, but I wanted to try and get this plane made from a single sheet of foam board. I feel they're about right. Plus I decided to put a dihedral on the wing to make the plane a little more stable. The wing build is identical to the BB right up to and including the test folding of the top surface to get the aerofoil profile to form. My original build varies from the plans I've prepared, which uses the later Flite Test spar design that locates in slots in the wing, but the end result is the same. 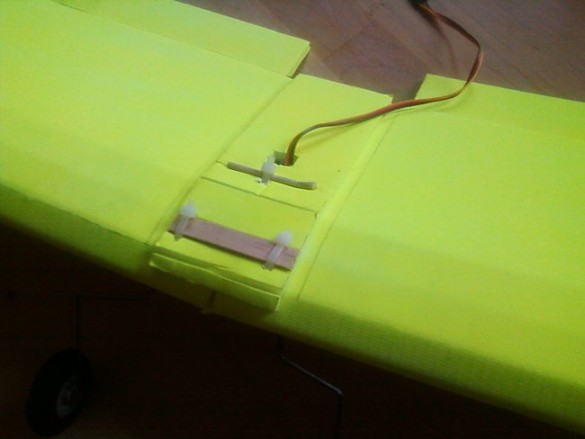 I use a centring pad along the top of the wing, which matches the width of the fuselage. 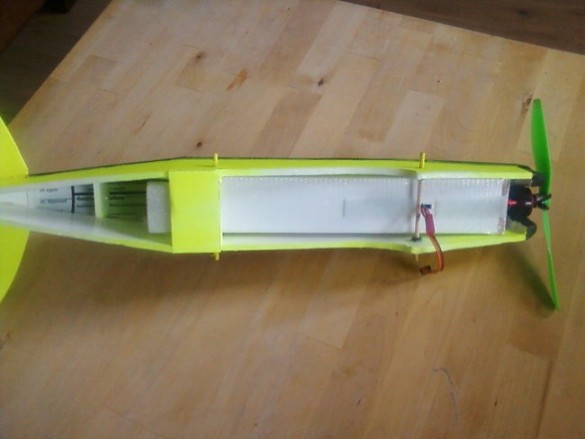 Instead of cutting into the wing, which I feel weakens it, I cut away the fuselage to the same profile as the wing. A little pad on the fuselage just behind the wing helps to locate the wing and strengthen the fuselage. These same details appear on all my later designs. To remove the swappable pod I have to remove the front wing–mount skewer, which is a slight inconvenience but not drastic. 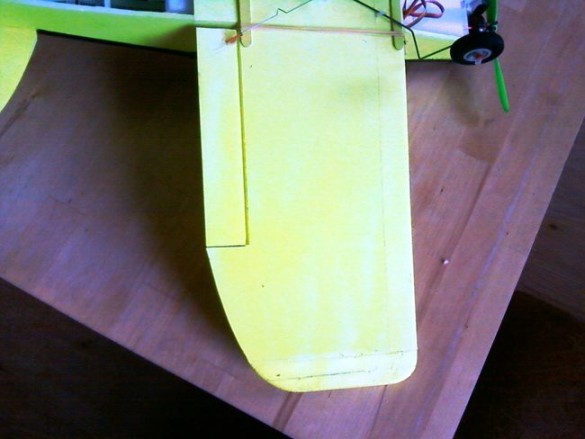 Once I had the basic plane built I added a few cosmetic details. The foam extensions on the wingtips led to aesthetic shaping of the wing trailing edge. I 'painted' the foam with dilute PVA glue before spray painting and this stopped the foam from melting. 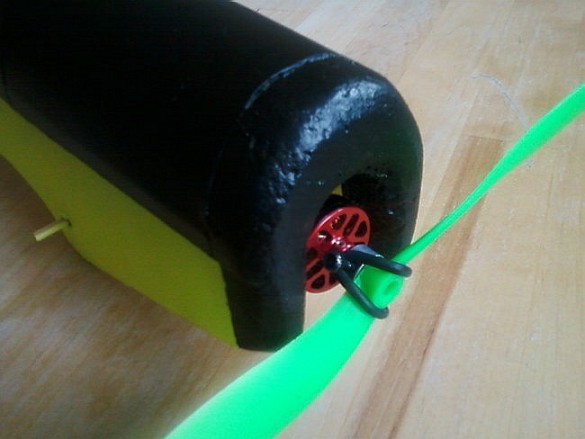 The nose detail was another little cosmetic addition in foam. 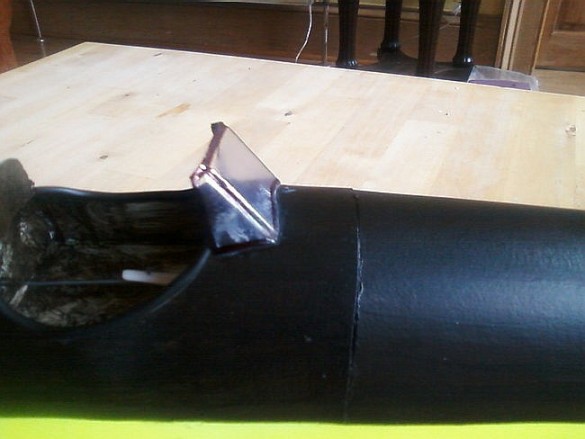 The windscreens are the ends from a bubble pack of screws – cut with scissors and then marked with indelible pen for the frame and glued down with superglue. 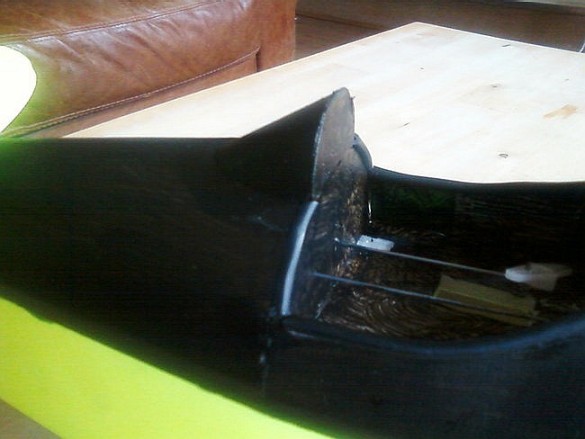 The headrests are cardboard – mini versions of the turtledeck detail on the BB. I added a cockpit edge made from round electrical wire with the core pulled out. That helped strengthen the 'wobbly' edge and hopefully makes it look better. The black–on–top paintjob followed the natural line of the turtledeck, which made getting a straight line fairly simple, and also copies some 'real life' detail I saw on a number of similar aircraft. The black paint was fast drying water based satin varnish with some black watercolour from a tube to pigment it. I sprayed the inside of the fuselage with hairspray – a cheap alternative to fixative that artists use when painting with watercolours. This gives the paper a thin–ish coat of waterproofing.

It was great fun and amazingly fast to build. It was such a positive experience, I quickly moved–on to other designs and other planes.

& a cautionary tale of mixing fog and foam board;