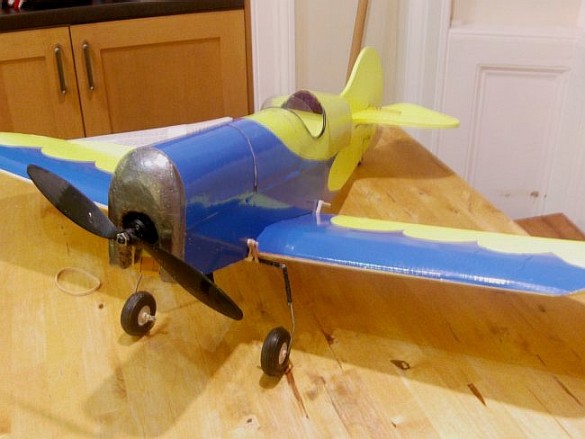 Plans - PDF file. (Can be printed on A1 foam board.) GeeBee Sportster Tribewt.

Built as a second test fuselage in my 'Tribewt' build article - this plane finally got its wings, a paint job and a maiden. Click the first video link to see the maiden.

There was a slight power issue at the start of each flight in the maiden video , with the prop only achieving full revs once the plane had picked up speed - which suggested the prop I was using had too much pitch. I reduced that for the next outing. Another issue was excessive 'spring' in the landing gear - I tried a ground take-off, but the plane just leapt about like a kangaroo until it did a nose over.

To combat this I've stiffened the landing gear by cross-linking the top of the struts with an extra piece of piano wire bound on with thread and CA glue - hopefully that will make a difference.

This second video is a later proving flight;

The third shows a little aerobatics; 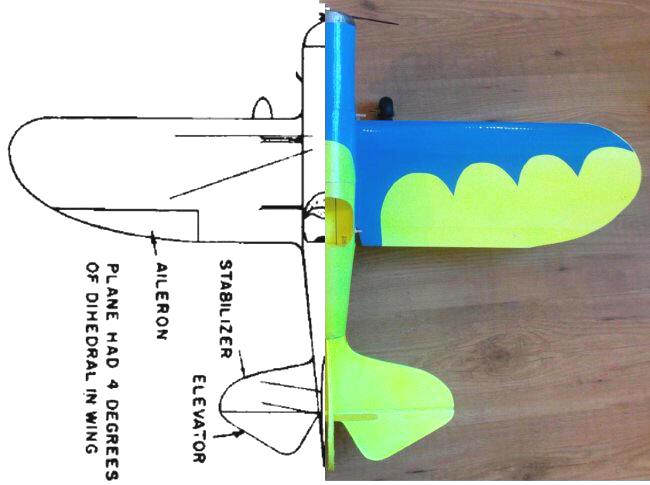 In terms of scale it is what it is. I've tried for the 'look' of the plane and overall it's pretty close. Wingspan is a little less, and the tail surfaces a little larger. The plans offer the option of increasing the wingspan. 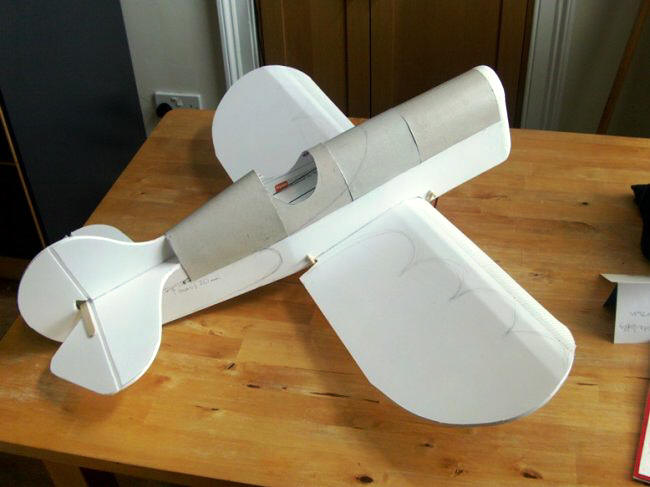 Here it is ready for paint. 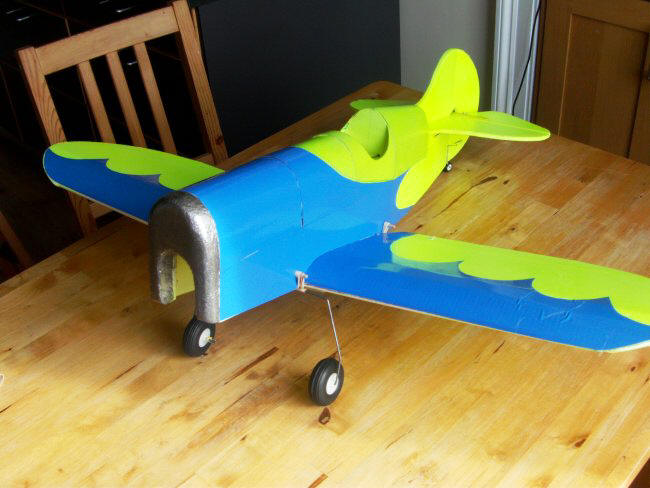 The 'blue' is sticky-back plastic. The front is polystyrene painted with 'pewter' acrylic. 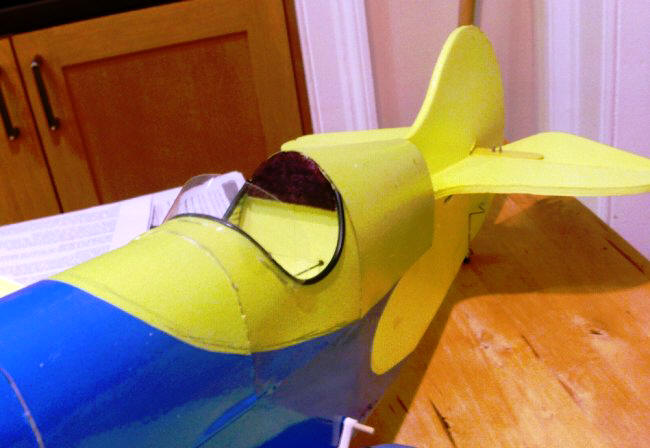 Here's some extra cosmetic bits added after the maiden; a little headrest, some padding around the cockpit and a windscreen.

The GeeBee Sportster Tribewt gets flaperons!

Following on from my success fitting flaps to my Morphocoupe, I decided to try flaperons on my GeeBee.

I've never really managed to get the GeeBee to land without it nosing over, which, ignoring the issue of long grass, is mostly due to the high landing speed. I felt it was worth trying to get the landing speed down and flaperons seemed the best way to achieve this.

(If you watch the video link at the end, you'll think I wasted my time, but the grass on my flying field hasn't been cut for a while and just now I can't land anything without it nosing over!) Actually, I don't think it will ever get cut - most likely it was allowed to grow to meadow as habitat for insects etc.

Deploying flaps or flaperons makes two things happen; the wing produces more lift (which can allow you to fly slower) and there's more drag (which will slow the plane). I was after the first effect of producing more lift.

I read that on an RC plane up to 30 degrees of flap deployment produces a steady increase in lift, but beyond that angle only the drag increases.

I also read this cautionary note about flaperons. If too great a flaperon deflection is dialled-in at the start, when additional aileron deflection is applied to bank the plane, it can create so much drag it can slow the 'down-aileron' side of the wing so much, it actually produces an opposite turning effect to the one you expect!

I already had separate servos for each aileron, but they ran through a Y lead to the single aileron output on my receiver. Fortunately I was using an OrangeRx R620 DSM2 receiver which has 6 channels, so I was able to run the leads separately and plug the second aileron servo into the AUX port. My Spectrum DX6i has a preset programming function for adding flaperons, so, after a visit to YouTube to get it all explained, setting things up was fairly easy and painless. 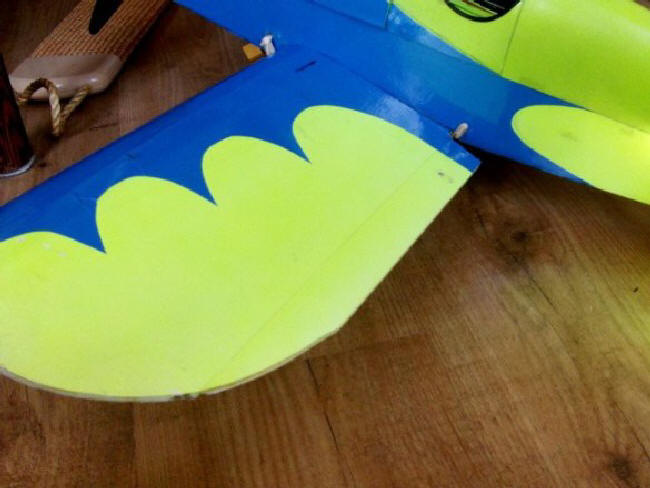 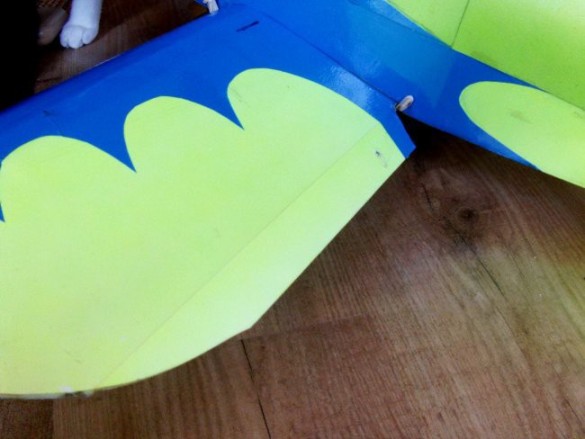 …only about fifteen degrees. 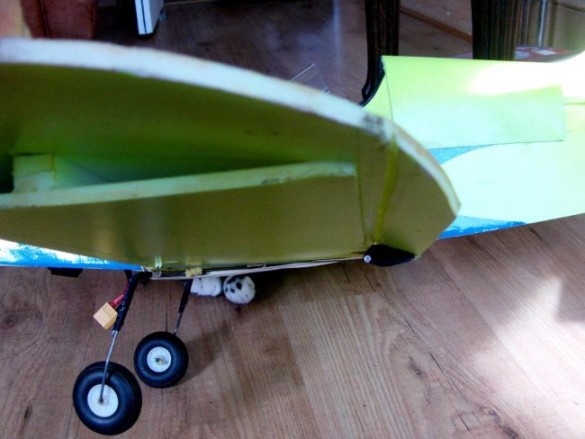 This gives me a good undercamber wing profile without adding a great deal of drag. You'll spot my assistant, Chester the cat, helpfully pointing to the important bits. 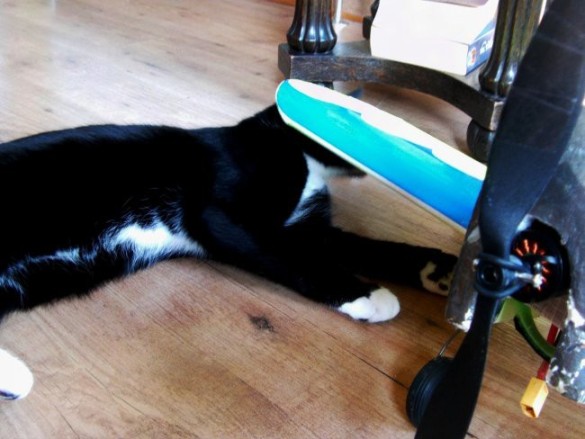 From the flight testing I've done so far I can fly the GeeBee significantly slower with the flaperons deployed than without, and at a lower throttle setting. In fact if I 'retract' the flaperons at these slower flight speeds there's not enough lift produced to keep the plane flying level and it immediately starts to lose altitude.

Another small issue I never thought about is prop torque. I must have a few 'blips' of right aileron dialled-in for level flight at speed, but when I deploy the flaperons and reduce revs the prop torque reduces as well, resulting in a very slight left roll tendency. For complete easy-peasy control, I need to find a YouTube video that can tell me how to link a few less 'blips' of right aileron adjustment to the flaperon deployment. Any suggestions?

Here's flight footage of the flaperons in use…