Stuck with heavyweight foam board? 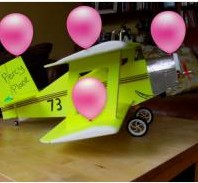 Of course it will – just a little faster!

As a newbie flyer and newbie scratch builder (March 2013) I was slow to spot that not all foam boards are the same. Apnewton from Australia has a great article on this topic; "Foamboard in Australia" (links to the Flite Test website).

After reading his article I realised I was using a foam board that was just as heavy as the ones causing concern in some of the Aussie Flite Test community. Not that it ever bothered me before!

My foam board weighs–in at 0.39 g/sq inch compared to the Dollar Tree stuff at 0.19 g/sq inch – which sounds terrible – but it's not all gloom–and–doom! UK (and other non–US) foam boards can be a bit heavier, but they're still a pretty light build material.

See if this sounds familiar – you launch a new plane into the air, giving it a good strong throttle setting to make sure it gets airborne and stays there. If it doesn't nose–plant, or loop over your head, you fly it around for a while to trim it out, then ease–off the throttle to find the lowest setting that will keep it in the air. Anything below that is a landing setting. You probably try a stall test to see what happens and then chop the throttle to see how the plane glides (hopefully not like a brick). Sound familiar? I think most flyers go about it roughly the same way.

Who knew I was using more throttle than anyone else?

The only time I noticed anything like a problem was with the Old Fogey – for comparison mine's 690g 24.3 ozs. With the original 8amp Blue Wonder motor (roughly 90W of power) it took a pretty high throttle setting to keep my Old Fogey in the air – but it flew, and being a newbie that was exciting enough for me! Remember those days?

In contrast, my Nutball and FT Flyer both did what it said on the box – and I couldn't really see any difference between how mine and the Flite Test ones flew. Both mine fly on the Blue Wonder and both manage near standstill high–alpha flying and all the other stuff – they even cope with stronger winds if I slap–on a heavier battery.

Even my scratch built Tribewt, which weighs in at 570g 20ozs, flew fine (for a beginner) on an 8amp/90W motor. I later upgraded the motor to 15amp/170W as the first one seemed to be working a bit hard.

Ignoring brownout crashes, I never spotted any problem with my Velie Monocoupe. I started with an 18amp/200W motor, had loads of wing area, and, due to a lucky build error that resulted in slight undercamber on the wing, the plane flew fine and slow – even coping with a big pile of extra nose weight to get it to balance.

So what's going on? I answered that earlier – heavier planes need more power/speed to keep them in the air. Unless you compare a plane made from the different foam boards head–to–head, you probably won't spot any difference.

In fact extra weight can sometimes be an advantage as more weight gives the plane better penetration.

It was only when I built Cstence's Smash Drone that I really spotted the weight difference. Those Smash Drones in his intro–article just float around, swooping and looping like they were made from… yes, US foam board.

Mine – I struggled to get it into the air! Not surprising since it weighed–in at 890g 31 ozs. However once I reduced the Angle of Incidence and adjusted it to fly faster – it was fine. You can see my modifications in the Smash Drone article.

So – yes, build as light as you can, but don't despair if you can't get hold of the super–light US Dollar Tree or equivalent foam board. Heavier foam boards can and do still work with these Flite Test designs.

Not convinced – here's a video of my 'heavy' foam board builds defying gravity;