THE SMASH DRONE – designed by CStence. 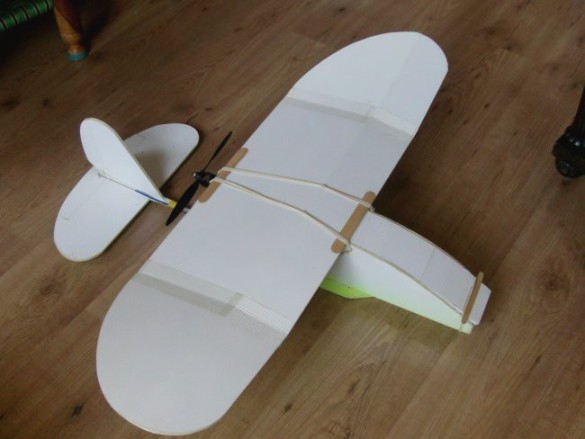 Here's my version of the Smash Drone – it's a little stubby because I was using what was to hand, but the wing and tail separation are still roughly the same as the Old Fogey.

Plans are available from the Flite Test website in this article by CStence; Strange New Swappable Trainer Can Take A Hit 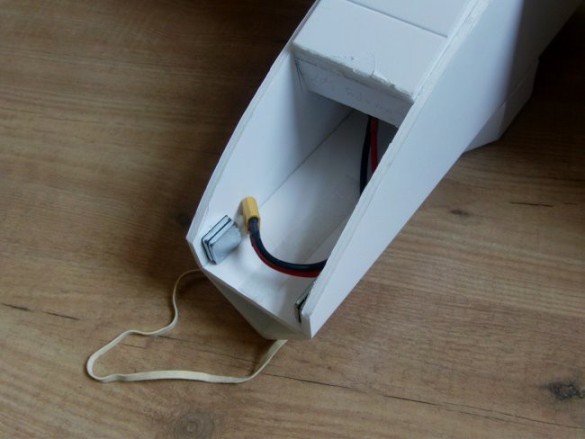 Here's the battery pod – my biggest battery is only 1000mah, so I had to add some weights. During the test flights I added even more weight – 50g in total. From there I moved–on to doubling my 1000mah batteries with a Y–harness and removing the weights. 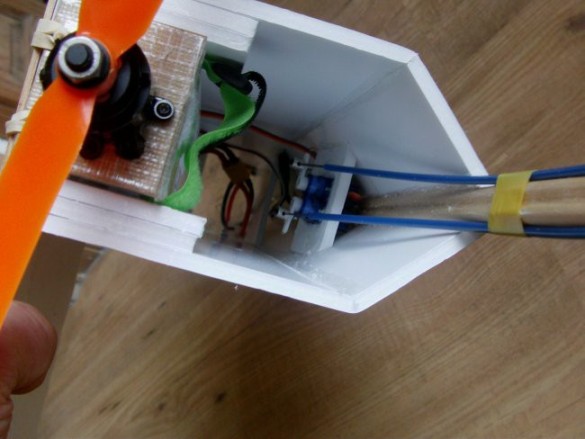 Here's the servos and servo tray. 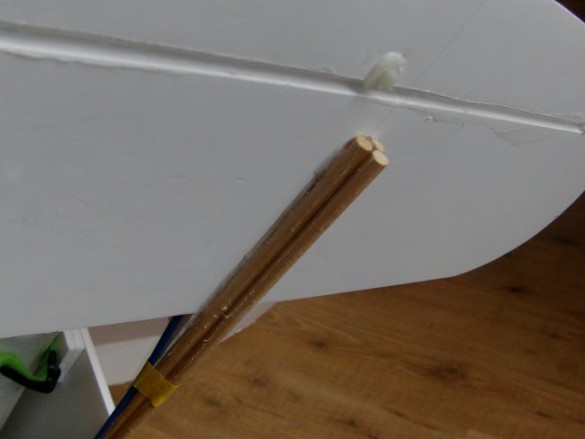 The main difference between this Smash Drone and the original is the boom. Mine is made from a triangle of 6mm dowel rods I had sitting around. They seem to be performing well enough so far, but they're probably heavier than the specified balsa or hardwood boom. 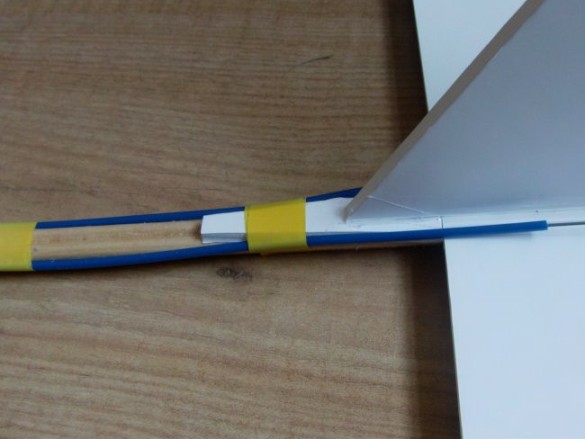 Here's a bit of tidying detail around the tail. 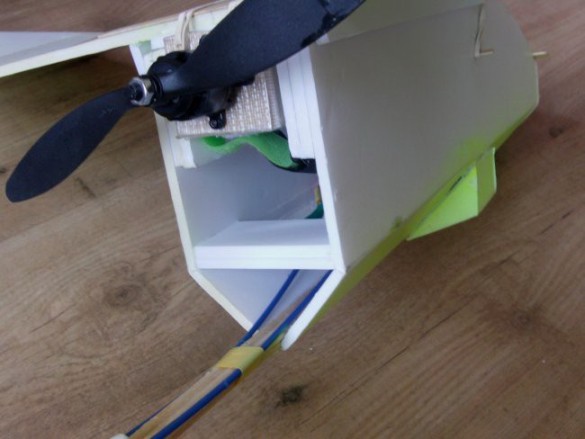 For the first flight I felt the 8x4 prop was a bit anaemic with the 1250KV motor, so I shifted to a 9x3.8 prop which 'just' fits. After the second flight I noticed a few tiny nicks on the boom and worked out the fuselage was springing open during landing (and possibly during some manoeuvres) and this was allowing the boom to move towards the prop. Later I put in the cross brace you can see in this picture to hold this part together and stop that movement. I think that could be a useful addition to the existing design.

Here's a link to some early flights;

Regarding flight characteristics – my plane seemed a little 'leaden' in the air. I'm not familiar with pushers, but it seemed to be flying like a much heavier plane. It also took a bit of effort getting it to climb–out at take–off. I concluded it was a combination of motor thrust angle; too level, and trying to push the plane down, and the high incidence angle of the wing, which was trying to make the plane climb. Both were in conflict, and both increased with speed. Once the plane was up it was pretty steady, but the motor always seemed to be working quite hard for the amount of forward movement I could see. On the plus side, with zero power, it glided beautifully in a steady very predictable descent. 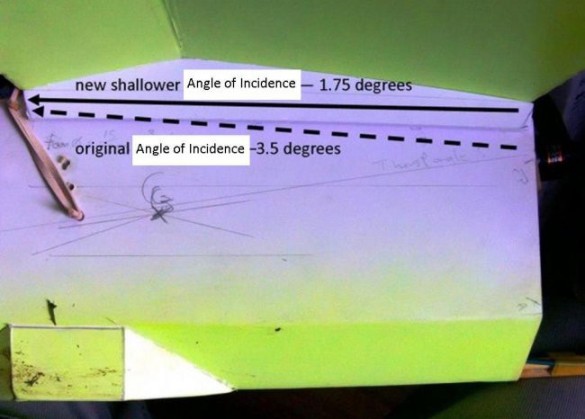 I wanted to see if I could improve the handling so I measured up my angles and concluded the Angle of Incidence* for the wing is about 3.5 degrees, which is quite steep (relatively speaking) – plus the Old Fogey wing has significant undercamber, making it even more 'draggy'. 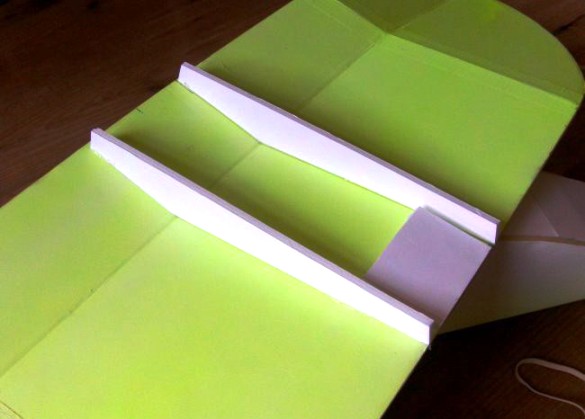 I decided to reduce the Angle of Incidence by lifting the back of the wing. First I reinforced the wing to replace the stiffening the wing gets from the top of the fuselage. These stiffeners straddle the fuselage and are a fairly loose fit. Then I placed a foam board pad at the back of the wing to sit on top of the swappable pod mount – I had to glue the pad onto the wing to prevent the wing sliding backward in flight, as it could now slide over the top of the swappable pod and disconnect the rear elastics. I'm glad I spotted that! I doubt the fuselage would fly very well without the wing! This pad raises the wing by 5mm. 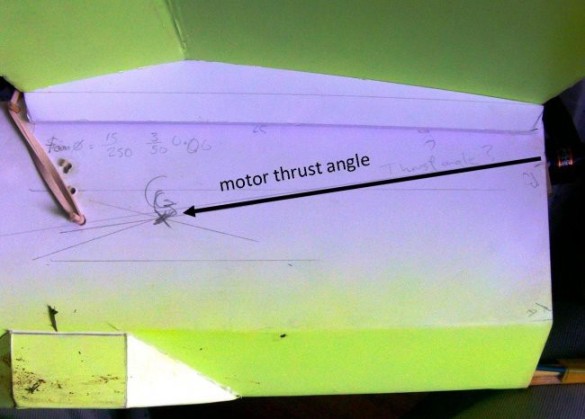 Changing the thrust angle was much simpler – I just punched through extra skewer holes at the forward end of the power pod. I tried a couple of different angles before taking it through the plane's centre of mass which I was able to find using the method demonstrated in my How to find your TRUE CG article. The pod still sits between the cheeks of the mount, which stops sideways movement, and fore–and–aft movement is taken care of by the rear mount and motor thrust, so all the skewer has to do is prevent up and down movement. 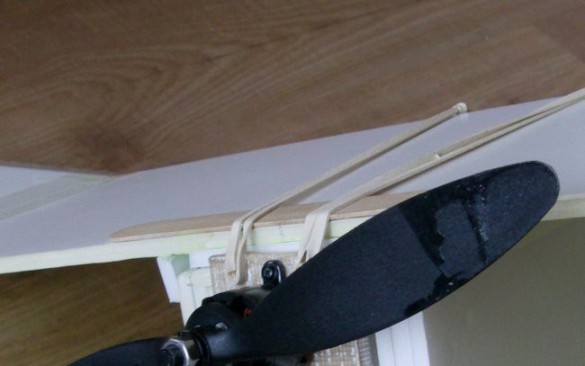 Here's the next round of flights – I was able to remove that extra 50g of balancing weights and found the plane much more responsive and generally freer flying;

And a later set of flights showing the plane performing well in stronger winds;

With the reduced Angle of Incidence the plane tracks a lot flatter and smoother, but that's at the loss of some of the slower speed flying performance – it will fly slower but starts to sink as the speed drops. However it still glides and descends extremely well. The wing's angle of incidence could be increased a little to bring back some of the slow flying characteristics of the original – split the difference again and drop the back of the wing by half the thickness of the foam board pad, giving an angle of attack of roughly 2.7 degrees.

As a footnote – though the plane flew very well in its final configuration it was very heavy, and I was always envious of the lightweight original. I came up with the drastic solution of remodelling the plane as a tractor version – Frankenplane 2! which has been a great success.