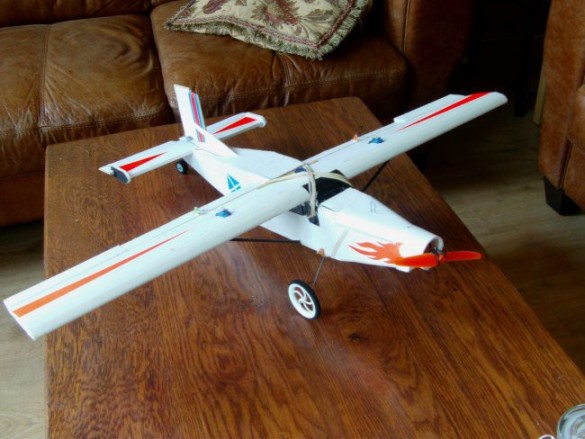 The grass on my local flying field has not been cut this summer; they've allowed it to go to meadow, which is good for all sorts of wildlife, and, it occurred to me, ideal for maidening planes – especially this one. After many attempts to get this plane in the air, it hung on my office wall for about 6 months, ignored an unloved. Well, I went for it. 'Landings' were gentler, but I still managed to go through all three of the 7x3.5 props I had with me. The plane was so close to flying I thought I'd give it one last attempt. The only spare props I had were 8x4, which were all wrong for the 2200KV motor running on a 3S battery, but I reasoned if I kept the revs down, and didn't fly for too long, it should manage.

So here it is – the Pilatus Porter maiden;

1. I flew it with the flaps deployed, partly to keep the speed down, and partly to improve lift. The wing area is OK for this weight of plane, but not great, so I wanted the first flights to be as slow and manageable as possible.

2. I eventually overloaded the ESC. It was super–cheap, and I was hammering it with the 8x4 prop. The replacement is a lot more robust and better matched to the motor.

3. The 2200KV motor was one that was supplied in error when I ordered a 1400KV motor, rather than pay for return postage the supplier just said to keep it. It seemed to fit with the smaller prop this plane should have, so seemed ideal, but I think the props I was buying were designed for much lighter planes. Live and learn! I've ordered some much tougher 7x4 props, so they should do the job.

4. When it did fly, I was surprised how well it flew. Once I get a reliable motor/prop combo running I'll be able to work on fine–tuning the trimming–out and hopefully get the plane flying a bit slower. I kind of like the graceful aspects of flying rather than the frantic aspects.

5. Apologies, but there's no plans – this was a make–it–up–as–you–go build.

Here's some more images of the plane; 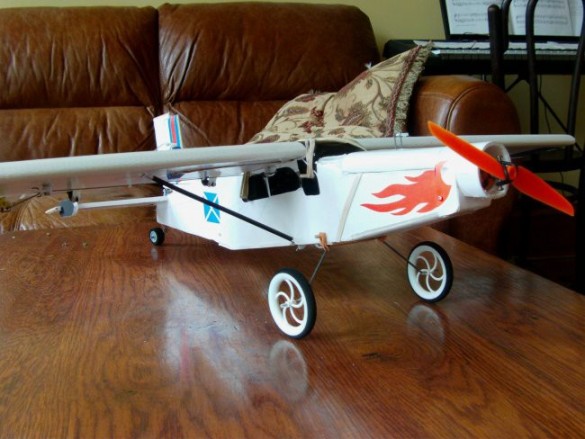 Struts are functional and made from control linkage wire with a skewer heat–shrunk alongside it. This is fixed using modified Z–bends to servo arms embedded in the wing, and control horns screwed to a plate underneath the fuselage. 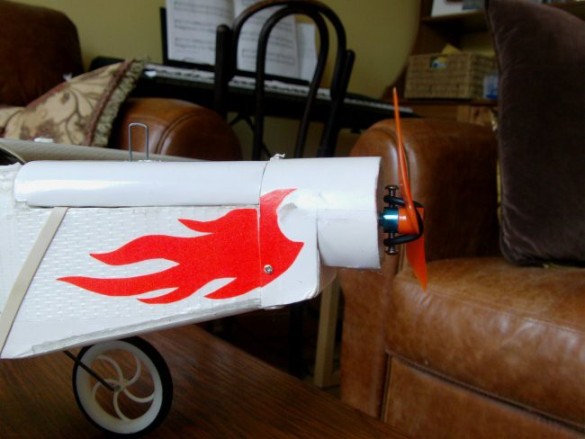 I used to have exhaust tubes on the nose, but they were the first thing to fall off! The flame decal used to wrap around the exhaust, which looked pretty cool, not so much now. I might add them on again once the plane is flying reliably. There's the new prop–saver. The nose is 'botched up' using foam board with paper removed from one side to allow it to bend more uniformly. It has those tiny screws holding it in place to the firewall. 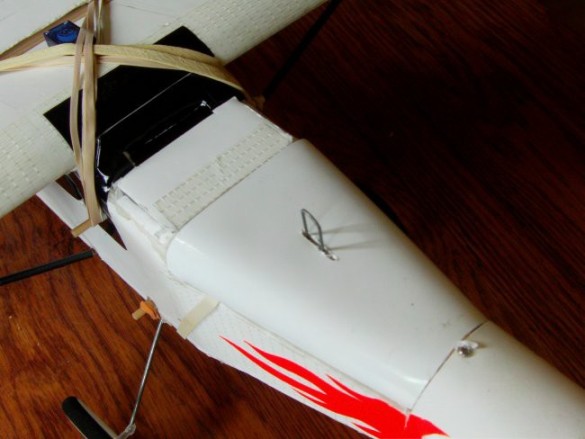 There's two hatches; the tapered one has a 'spring pin' system, the back one has a simple flap with a tape hinge, and is held down by an elastic band around the fuselage. 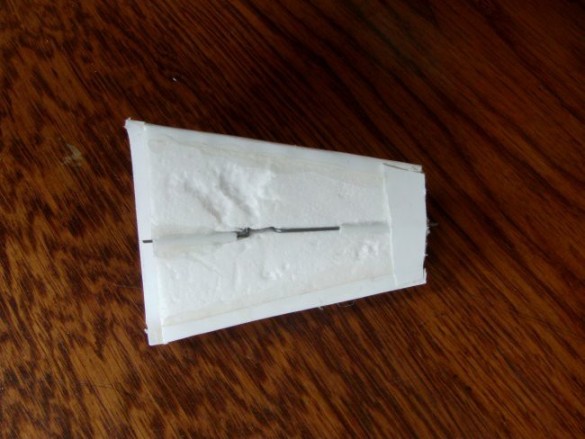 Here's the spring–pin system. Pinching the top loop pulls the pins back allowing the cover to be fitted. Release the loop and the wire ends locate in holes in the fuselage. The wire runs through plastic tubes to keep it aligned with the locating holes. 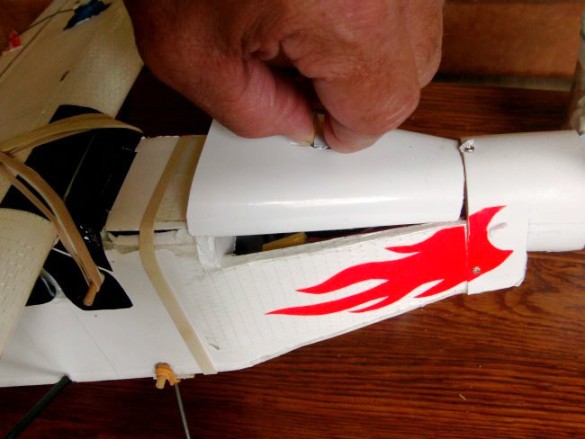 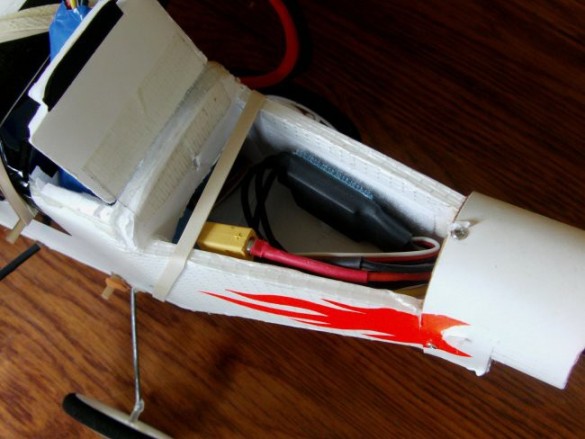 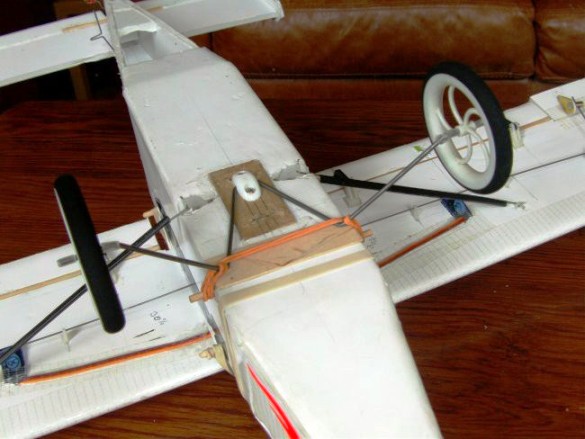 This is my 'simplified' landing gear, which replaced the fancy (and heavier) gear I created first time out. 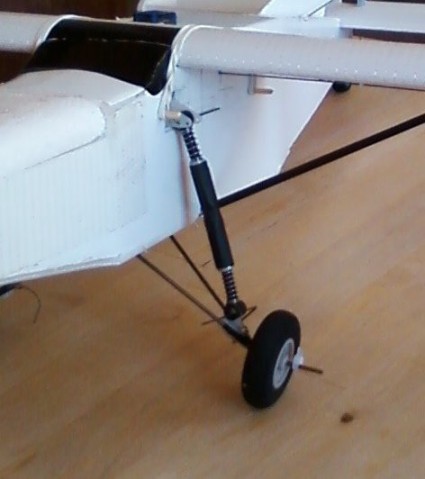 The old landing gear assembly. Looks great, and had scale motion, but it was more important to get the weight down. 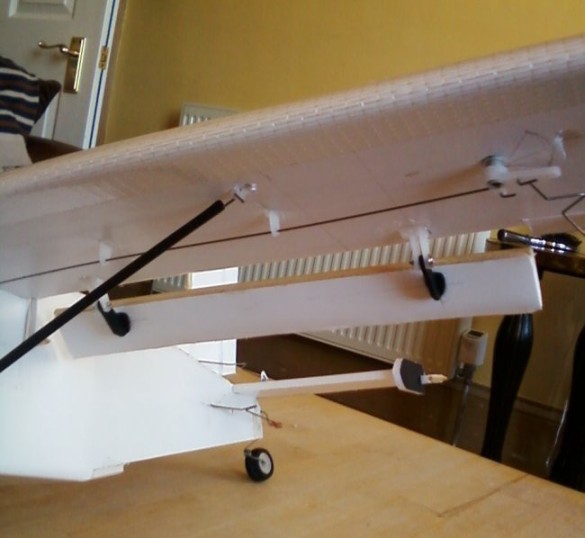 This picture shows the flap hinges and the bell–crank lever for the ailerons. A single central servo operates both ailerons through identical pushrod assemblies on each side. 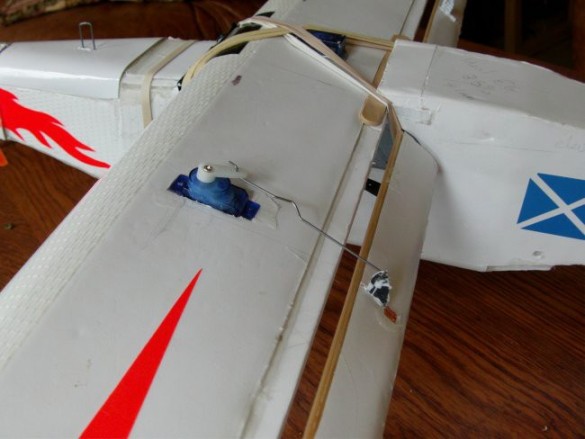 Here's the flap servo and linkage, with the flaps deployed. I reinforced the front of the flap with a skewer, because it would be pretty weak otherwise. 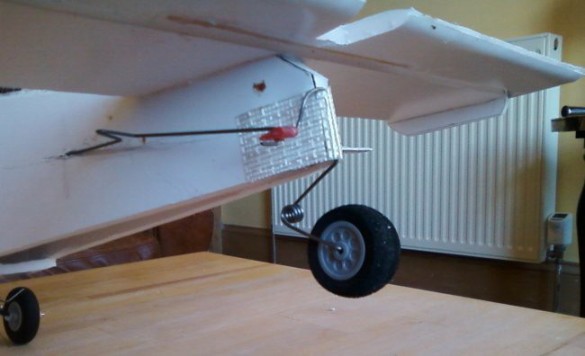 Tail steering is as 'authentic' as I could manage. This operates from the same servo as the rudder but uses a separate control rod. I've mounted the rods at different distances out from the servo pivot so that the tail wheel steering is significantly more than the rudder steering. This gives great manoeuvrability on the ground.

It's great to finally get this plane in the air, but I think if I ever built it again, I'd scale it up to maybe a 1 metre 39 inch wingspan to get a more graceful flight.